We’ve just finished compiling our Q1 2013 Zillow Home Price Expectations Survey (ZHPES), where professional forecasters provide predictions for housing market growth in the near term. This survey marks a break with the past in that the survey benchmark is now the national Zillow Home Value Index rather than the Case-Shiller index. The prediction for appreciation in 2013 is 4.6 percent, with the lowest projection at 3.5 percent depreciation and the highest at 8.5 percent appreciation. This edition of the survey was compiled from 118 responses, including the projections of economists, market and investment researchers and real estate experts. 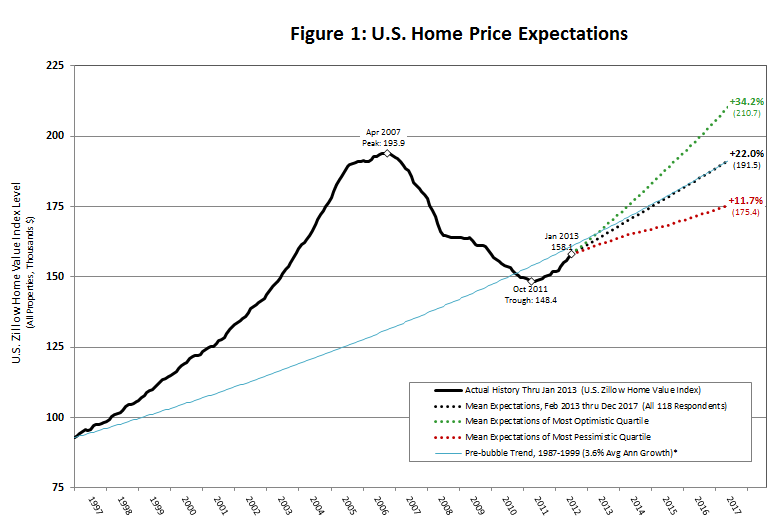 Figure 1 shows the forecasted, cumulative home price changes by quartile among panelists. It shows that, while still below the pre-bubble trend line, respondents on average expect us to return to it by 2017. 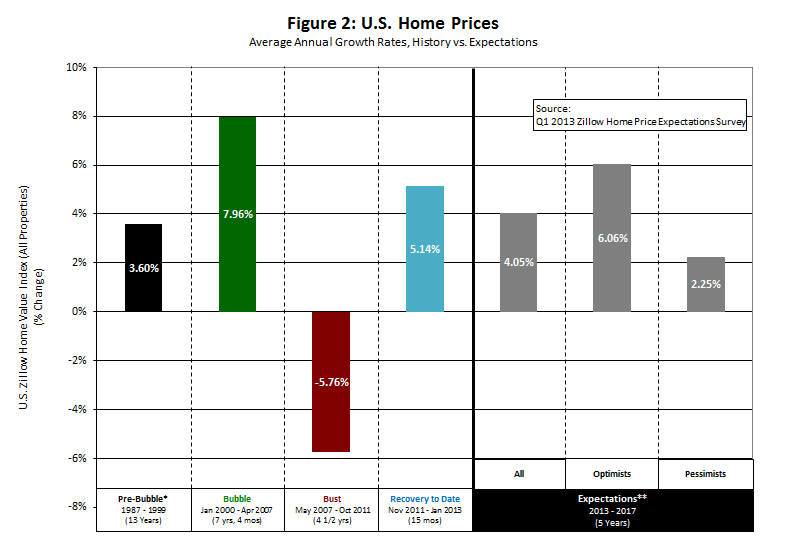 It’s also interesting to break up the market by growth periods to compare historical annual average rates to expectations, as done in Figure 2 above. Covering expectations for annual average growth to the end of 2017, the average of all respondents, at 4.1 percent, is above the pre-bubble average of 3.6 percent. Indeed, the optimists, on average, seem to expect the recovery to continue modestly picking up speed. And while on average the pessimists expect things to slow, it would not be too far below the pre-bubble average.

Table 1 below shows responses from the five most pessimistic and five most optimistic real estate experts in the survey (sorted cumulatively over the full five-year horizon). The greatest cumulative (through the end of 2017) price depreciation forecast is from John Brynjolfsson of 11 percent, while the greatest appreciation of 77.9 percent was predicted by Ethan Penner.

Related Articles
Economics Buyers: Window of Opportunity Still Open by The KCM Crew on September 30, 2013 in Interest Rates The Fed recently announced they would continue their current pace of purchasing bonds until the economy was stronger. This bond purchasing program is the reason that mortgage interest rates are at historic lows. Rates began to increase over the last several months just on the anticipation that the Fed […]
Economics Why It’s Wise to Reduce Debts Before Applying for Mortgage   Shutterstock By Credit.com   | posted Sep 11th 2013 12:41PM Updated Sep 12th 2013 1:07PM By Scott Sheldon Trying to secure a mortgage right now? From higher mortgage rates, to rising home prices to the contraction in buying power — securing financing, for some, can be no easy endeavor. As prices, and rates rise simultaneously, lenders will still place the weighted emphasis on […]
Economics Do you really need to spend a lot on home insurance? By Andrea Duchon | Yahoo! Homes – Wed, Sep 11, 2013 1:53 PM EDT Want to make sure your home and family are adequately protected? Here are five questions to help you figure out how much insurance you actually need on your home. When you buy a new house, it seems like there are a […]