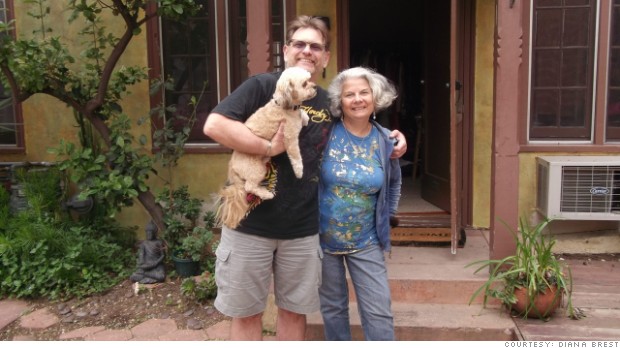 Diana Brest is getting smaller Social Security payments because she was unemployed before retiring.
NEW YORK (CNNMoney)

Losing your job is a nasty shock at any age, but for older Americans nearing retirement, there's an extra kick: A late stretch of unemployment will haunt them throughout their Golden Years in the form of lower Social Security payments.

"Those years are vital to their Social Security benefits," said Gary Koenig, director of economic security for AARP's Public Policy Institute. "It's something you'll have to deal with your entire life."

Social Security benefits are based on a person's highest 35 years of earnings, which are then indexed for wage growth. The last years of one's career are when most people earn their highest salaries, so replacing those top-income years with less lucrative ones — or no income at all — can prove costly. A person who misses a year of earnings could see his Social Security payments reduced by 3%, or just over $450 annually if he receives the average check of $1,262 a month, according to a calculation AARP ran for CNNMoney.

For Diane Brest, four years of unemployment at the end of her career meant a $68 reduction in her monthly Social Security check.

"That's $68 I could use towards food or medical expenses," said Brest, 62, who lives in Phoenix. "Food has gone up in price. Minimum payments on credit cards have gone up. Health insurance has gone up. It's very depressing."

Brest got hit with a double whammy that's common for those laid off late in life: To get by by, she had to start collecting Social Security several years earlier than she planned. Before being let go from the insurance company where she worked for 14 years, Brest had intended to work until age 66, when she would have been eligible to receive $1,200 a month. Instead, she chose to start collecting at 62 because she needed the money. She thought she would get $968, but because of her unemployment, she's only getting $900 a month.

It's tough for older workers to find new jobs once they are laid off. Some 44% of the 50-somethings who lost their jobs during the Great Recession were still unemployed a year later, said Richard Johnson, director of the Urban Institute's Program on Retirement Policy. Among those laid off at 62, two-thirds were still jobless 12 months later.

If they find work, it's often for lower pay. Those age 62 and older saw their median income decline 29% in re-employment, while those in their 50s worked for 18% less in their new jobs, according to the Urban Institute.

Social Security is a vital source of income for senior citizens, especially those who are lower-income and lower-educated — the same folks who are more likely to lose their jobs, Johnson said. For 53% of married couples and 74% of single seniors, Social Security represents half or more of their income.

Margaret Ronner, 62, depends on her monthly check to pay for housing, health care and food. But she has to cope with a $39 a month reduction in her benefits because she was unable to land a full-time job after losing her position in 2008 as a licensed practical nurse at a Veteran's Administration hospital. She was only able to find part-time work after that, earning about half of what she had previously.

While she was looking for a full-time work, Ronner didn't consider what her reduced earnings would do to her Social Security check. But now she knows all too well. The Lebanon, Penn., resident isn't able to pay down her credit card debt as quickly as she'd like, nor can she buy as many gifts for her nieces and nephews.

Though she considers herself retired, she's looking for some home-based work, such as making crafts, to bring in more money.

"I need the income," she said.

First Published: May 7, 2013: 6:06 AM ET
Related Articles
News For Seniors Finance Information for Senior Living from Sharp Seniors.com   A major component of financial planning is factoring in costs toward quality assisted living care. People are living longer than they have at almost any other time in history, which means the need for care will continue to rise. The economy is down and health care costs are up. It’s never […]
News For Seniors Assisted Living Checklist by Nicole on September 19, 2013 on Shart Seniors – A Trusted Senior Living Resource Moving into an assisted living community is just one of many important decisions that need to be made regarding senior care. The next challenge is choosing the right facility for you or your loved one. A personalized checklist will help […]
News For Seniors Is Assisted Living Right for Your Aging Loved Ones? Posted in Selling by Regina Madiera-Gorden      Making a decision about whether assisted living is right for your loved ones is one of the hardest decisions we face today. Over the years I have worked with many adult children and their parents as they prepare to make the decision about when the parents should sell their family […]